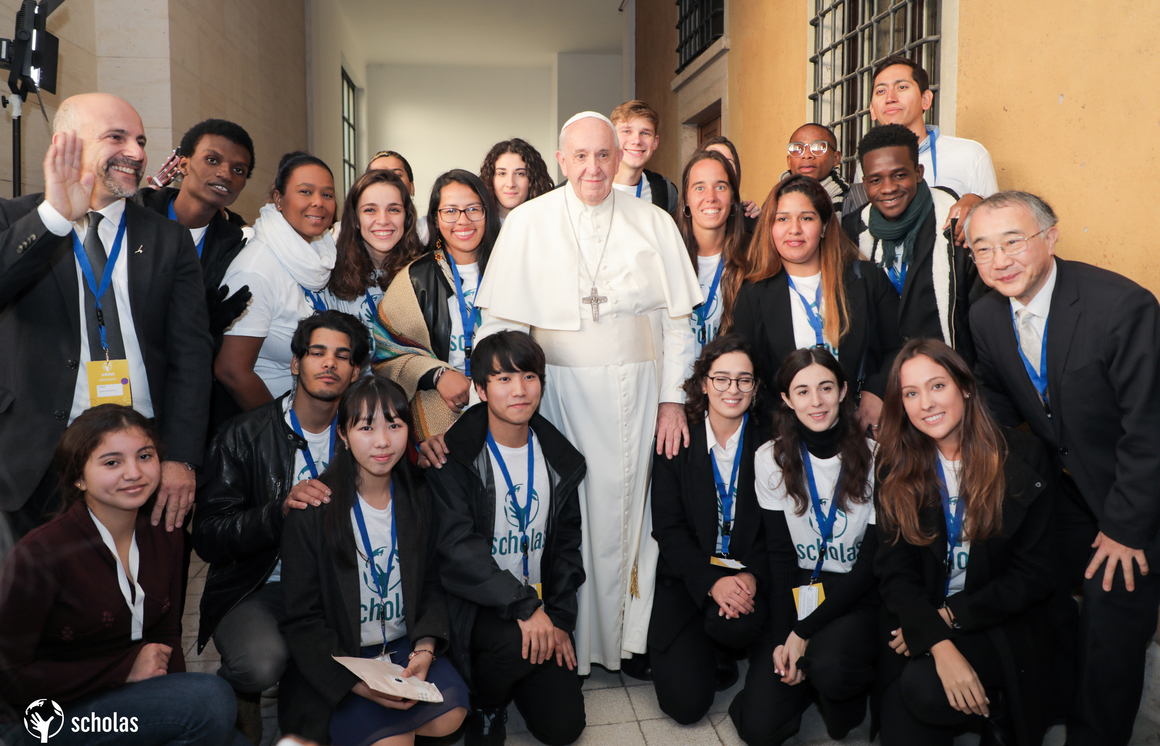 play_arrow
Bringing together students from over 400000 education centers in 190 countries to listen to each other’s stories.

location_on Vatican City, Vatican City
Scholas Occurrentes is an international organization present in five continents through its extensive educational networks. Its mission is to create the Culture of Encounter; by bringing young people together from diverse backgrounds in an education experience that generates understanding across the globe.
Education, Youth 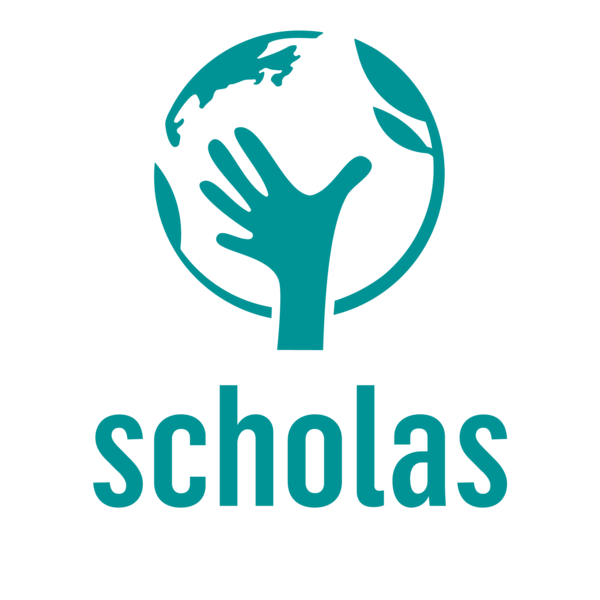 Our utopia, that of all of us who are part of Scholas, is to create a Culture of the Encounter by means of this education

Creating a Culture of Encounter

Since the beginning, Pope Francis imagined Scholas as the possibility to offer a concrete answer to the calling of this time, entrusting it the task of teaching based on the openness to others, on listening and gathering the pieces of a divided world and devoid of meaning, to create a new culture, the Culture of Encounter.

"Culture of the encounter" is a call to encouraging people to be fearless in the ways they look beyond themselves to the needs of others.

Today, 21 years after the first experience in Buenos Aires, Argentina, dreamed by the then archbishop of the city, Jorge Bergoglio- now Pope Francis-, and six years after its first steps in this world, Scholas is set up as an International Organization of Pontifical Right with offices in Argentina, Vatican City, Colombia, Spain, Haiti, Italy, Mexico, Mozambique, Panama, Paraguay, Portugal, Romania, Japan and Chile, and is present in 190 countries through its network, integrating over four hundred thousand education centers and reaching to over a million children and youngsters across the world.

THE CRISIS
The story of its origin

At the early XXI century, Argentina with its then archbishop Jorge Bergoglio, was immersed in a deep social, political and economic crisis which resulted in death, poverty and a universal cry “may they all just go away”. In the midst of chaos and hopelessness disguised as absolute indifference, Bergoglio gathered teachers José María del Corral and Enrique Palmeyro and gave them the mission to listen to the hearts of the young, because a new culture can only be born from there, from their pains. This proposal transformed diversity into its greatest asset, bearer of trust and beauty.

They formed the first group of students from Catholic, Jewish, Muslim and Evangelic schools both public and private, including members from diverse neighborhoods of the city who identified the education system as the source of their main pain, since they considered education was detached from their lives. However, this group of teenagers decided not to give up or get stagnated in complaints, they therefore submitted before the legislature a proposal that was unanimously voted became Law 2.169 “Buenos Aires, Educational City”.

This original group of 70 ended the year with seven thousand teenagers, who, without knowing, gave origin to Scholas.

“Scholas senses that that is what education is about. An education that opens up a door to the unknown, which takes us to those places where waters haven’t split yet, so that from there we can dream about new paths” -  Pope Francis

Scholas is a call to listen to life, so that from there we can create a culture to celebrate it. It’s education that teaches to find oneself and find one another, to grab the sense created in that encounter.

We were taught we should “have” things, acquire knowledge, tools, degrees to “do”, work, produce, prove so that- eventually only a few- we can be someone in life. This equation, besides postponing and conditioning oneself, subjects us to a mold, or category with which either you fit or you are discarded.

Scholas breaks with this logic by educating based on listening the “Being”, that unique and beautiful characteristic that composes what we are, so that “doing” means creation, the expression of oneself, and finally celebrate “having” which since it matches who I am, needs no more or no less.

When Games, Arts and Thinking are capable of listening and expressing this reality, they become Scholas education language, and all its experiences are an attempt to embody this intuition.

¡See how our innovation can be implemented in your community, in the Steps section!

Has achieved scale & impact across a significant range of counties. Its framework provides opportunities for young people to explore a creative process and then progress further to become educators/coaches providing opportunities for deeper learning/skills development.

What a wonderful programme that has supported so many across the globe. The impact has been monumental and the scalability is unquestionable. A huge difference over the last twenty years to global education.

Pope Francis launches with Scholas The University of Meaning on the World Environment Day
https://youtu.be/JG6IXk7fXUg
Embajadores de Scholas
https://youtu.be/T2CMdhNF_5A
youtu.be
https://youtu.be/uHaXu6lqzDQ
Game, Art and Thought Schools in Panama
Experience in Panama. After meeting at Scholas Citizenship as a foundational educational experience, this second stage presents young people the possibility of starting a path as educators, sharing their passions and learning with others.
"The bridge of colors and hope" San Antonio de los Cobres
To the bad named bridge of "The solutions" young people of San Antonio de los Cobres, Argentina, they made art, colors and above all, dreams and hope. This region, a sad scene of dozens of youth suicides, began a path to recover from the hand and creativity of its greatest treasure: its young people.
Covid-19: Emotional impact on Youth - Scholas World Cyber Meetings
We carried out an exploratory, descriptive, longitudinal type study, which shows the assessment that the groups made about their state of mind at two different times (pre and post virtual encounters).
Scholas in Haiti: "Many Colors, One Artwork"
Coming from other parts, all united with all their differences following the same concept of “the spirit of encounter” which this day encrapped in their thoughts, an open contact on a long-awaited dream in reality, a journey towards infinity, today like the water flowing through the rocks this dream takes its course, today Scholas is inviting young people in Haiti to continue this exciting adventure that began in 2016!
Scholas Citizenship in Miami
100 young people from 6 schools trust with great expectation to be able to discuss their problems together and make their proposals and solutions known to the whole society. Scholas Citizenship Miami.
International Virtual Meeting of Youth: A call to create, our responsibility
Respect for diversity and the promotion of dialogue, a culture of encounter and a new civic and social sensibility without frontiers: such are the values shared by Whirlpool and Scholas and underlying in the educational event Call to creativity: our responsibility organized on 7 October to build a new vision of the future by stimulating creative potential and inspired use of digital technologies.120 young people between 15 and 18 from “marginal places” in cities, mostly suburbs, in over 20 countries, from Italy to Colombia, from Venezuela to Japan, took part in a virtual encounter to develop their creative potential and turn ideas into actions that generate value for others.
Scholas Foundation initiatives in Tofo
Hundreds of children and young people in vulnerable situations have found a place of belonging where they can be feed both physically and spiritually with Scholas Foundation initiatives in Tofo.
Scholas Ambassadors
Scholas thanks all its ambassadors and cultural references for spreading and sponsoring the work of so many young people around the world to build together the culture of the encounter for peace.
First World Youth Cyber Meeting on Coronavirus
Organized by Scholas Occurrentes and blessed by Pope Francis, more than 120 students from 60 cities around the globe gathered at the First World Youth Cyber Meeting on Coronavirus, to face this worldwide challenge together
Show all

Creativity
Scholas' commitment in the virtual event for the relaunch of the Global Educational Pact in Vatican City
University of Meaning, managed by the Pontifical Scholas Occurrentes, was inaugurated by Pope Francis
300 teachers from 21 countries participated in the first World Cyber Meeting of Teachers, organized by Scholas Chairs
More than 120 students from 60 cities around the globe gathered at the First World Youth Cyber Meeting
Scholas launched its office in Japan, the first of its kind in Asia, after the first educational experience of the Foundation was held in Tokyo.
IV World Youth Meeting, in México, organized by Scholas and the Jewish education network World ORT
"Coding for Peace"'s launching, an educational program focused on technology for good and world peace
Scholas hosted the solidarity initiative “Painting Bridges” at the United Nations Headquarters in New York
Acknowledgement of Scholas as an "autonomous pious foundation" of pontifical right.
Scholas Occurrentes received from the hands of Queen Letizia, honorary president of UNICEF in Spain, the Moviliza Award, for its contributions to education
Scholas was officially presented at the United Nations, with the presence of its then Secretary General Ban Ki Moon
Launching of Scholas in the Vatican, with Leo Messi and Gianluigi Buffon
Show all
Map

01
Scholas Citizenship
It's Scholas’ founding experience. During 6 days, hundreds of youths from different schools in a same community get together to pick 2 problems that affects their everyday life, and after 5 days of working in depth on them. they commit to create solutions to submit before the community authorities.
Read more
02
Schools of Arts, Games and Thinking
After Scholas Citizenship, as a founding educational experience in which young people take on their creating capacity and responsibility, this second stage includes the possibility of starting a journey as educators, sharing their passions and learnings with others, through art, game and thinking.
Read more
03
Scholas “ ”
During this three- day experience between 100 and 200 youngsters with different realities get together to live the time, and through the perspective of childhood including games, stories, painting, thinking, writing and photography recovering the capacity of amazement.
Read more
04
Scholas Art
Scholas works on different experiences and disciplines based on art. Some of these include Paintng and Music. The paintings are the result of a journey that- by challenging preestablished stereotypes, symbols and languages-create a crisis in the understanding of oneself and reality.
Read more
05
Scholas Sport
Scholas wants to help young people live their passion by reclaiming the origin of sport rediscovering it as an education path and school for life. By different methodologies, Scholas seeks to give back to sports all its playful and creative dimensions which, through encounters, build community.
Read more
06
Scholas Technology
Experiences that brings together students and technology entrepreneurs committed to innovation and education, to create solutions to some of the most urgent needs of a community. Its axes are Scholas Labs Jam and the Scholas Labs Incubation Program.
Read more
07
Scholas Laudato
Scholas wants to promote the culture of the encounter between students of rural and urban schools for dialogue and the ongoing commitment of projects; support and train young people in rural and urban areas to disseminate and promote in their communities pedagogical models of ecological awareness.
Read more
07
Wezum - Youth International Observatory
The experiences of youths through the programs previously described brought about new challenges and learnings relevant to the problems that affect them. Wezum Is a youth international observatory aimed at analyzing the deep causes lying behind the main problems affecting teenagers.
Read more
08
Scholas Chairs
Scholas Chairs are spaces for reflection and action connected by a large network where every individual (professors, researchers, students) is enriched by the encounter with others. This is possible thanks to the bonds created among Universities, schools and projects belonging to Scholas.Social.
Read more
10
Bonus: What’s up?
In every educational experience what we feel about what we do is more important than what we actually do. "What’s up" is a calling to the impossible: catching the meaning resulting from the encounter, to reveal who I am and celebrate while sharing it.
Read more
Show more