We are using cookies to give a better service experience. By using our services you agree to use cookies. Read more
Accept
Reject
/en/articles/positive-pick-me-ups-the-boat-schools-enabling-equity-encouraging-gender-equality-and-tackling-bullying
https://cdn.hundred.org/uploads/article/cover_image/540/wide_w1140_DP2A3478.jpg
article

‘A world free from all forms of exploitation and discrimination where everyone has the opportunity to realize their potential.’ BRAC’s mission is ambitious to say the least, but doesn’t it sound wonderful? The most exciting thing about BRAC, an international development NGO based in Bangladesh, is that they’re having a very real effect -  with their boat school program being one of the most inspiring examples of this.

BRAC boat schools were established in 2011 to reach the children who otherwise couldn’t get to school. Operating in Bangladesh and the Philippines, where free state education is available, a large amount of children couldn’t physically reach school due to living in areas submerged by water for up to eight months of the year. Prior to BRAC’s help they would’ve had to get a boat, then walk a few miles down a road, to get on another boat – all just to get to school. They would then of course have to make the same journey home. It was a dangerous and exhausting process and as a result many children simply didn’t get to receive an education.

So, if the children couldn’t get to school, BRAC decided to bring the school to them. BRAC boat schools pick up the children right at their front doors (because the waters are so high during monsoon season there is no problem with a boat picking them up!) After collecting the students the boat travels to a higher-land area where they anchor themselves and hold their classes on the boat. At the end of the day the boats take the children home. 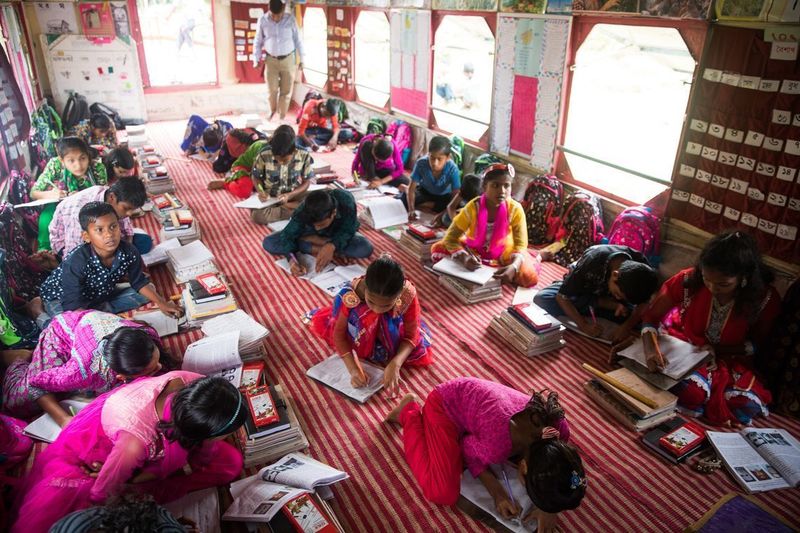 The boat schools are based on BRAC’s non-formal primary school model which they use in their other more traditionally set schools. The model BRAC has developed takes the government school model which is usually 5 years and shrinks it to 4 years. Students are then allowed to partake in government exams after their 4 years at the boat schools, meaning that they have a quality and recognised education and examination grades just like their land-dwelling counterparts.

The teachers also come from the children’s communities, rather than bringing someone from the outside in. This means that the teacher truly understands the students’ backgrounds and way of life, and it also increases the sense of community around the school. The children don’t just see the teacher at school but outside of school as well in their community, as such the educators feel more like a family member than a separate teacher. And it’s not just the teachers which are helping to tackle gender inequality. The student body at the boat schools are usually made up of more girls than boys – vitally helping to establish girls as equals to boys.

Community is key to what makes the boat schools so successful. No school is set up without talking to the parents and community leaders beforehand so that the unique situation of each community is prepared for when they start a school in that area. For instance, for communities where the land is under water for eight months of the year, there will be four months where the land can be used and so the children will be expected to work with their parents and therefore won’t make it to school. BRAC arranges for the classes to fit around this schedule and make amendments depending on what works for the community. This customisation means that children don’t fall behind in class and prevents them from dropping out of school.

Bullying is unfortunately a universal problem, with children all over the world falling victim to the negative consequences from being singled out. Children in the Philippines are no different, but BRAC boat schools have provided a unique answer for those children who face extreme discrimination due to the tribe they belong to.

Whereas in Bangladesh the schools are set up by BRAC for economically marginalised children, in the Philippines the main reason is to provide schooling for children from marginalised tribes among the Bangsamoro people such as the Badjao and Sama tribes. The bullying and discrimination is so extreme that it stops children from attending their local government schools, as such BRAC Boat Schools provide a vital lifeline for these children and help to provide them with a crucial second-chance at gaining an education.

The positive results of BRAC speak for themselves. There are now 400 boats in operation with 500 classes that serve over 14000 students, and over 50% of the students are girls!

The numbers are pretty impressive, but the true impact is best heard from the students themselves. When Tansina started at BRAC boat school she was a timid and scared child. Her mother died when she was young, so Tasina was responsible for helping her family, meaning education had previously been the furthest thing from her realm of possibilities.

BRAC enabled Tansina to get an education and now she is a full of confidence and excitement, ‘For me, daydreaming about going to school was a luxury on its own. But I don’t spend my days dreaming anymore. Now I am enriching my mind so I can go on and do the same for others.’

We were fortunate enough to have the amazing BRAC at our Summit event in October 2017, to find out more about their work watch the full introduction to BRAC boat schools below or head to their innovation page.

Grab Your Backpack, We're Going Unschooling
Homeschooling is quickly becoming a viable option for many families across the world as they witness
5 Innovations Taking On Mental Health
Mental health issues are on the rise, but so are the solutions that could help. This World Mental He
How Can We Make Education A Rich Experience For Everyone - Not Just The Privileged?
Education conversations tend to be split – there's the conversation about schools in the Silicon Val
Want To Know How To Tackle Bullying In The Age Of Social Media?
The invention of social media brings many wonderful benefits, but naturally it also has a dark side.
RECOMMENDED FOR YOU
play_circle_outlined community article
Linda Liukas On Making Computer Science Accessible Through Storytelling | HundrED Innovation Summit
Linda Liukas, is the author and illustrator of Hello Ruby, an innovation selected for the HundrED 2019 Collection. Hello Ruby is a picture book series that teaches a more colourful and exciting side o
View
article
Teaching Racial Equality
As educators teaching the humanities and social sciences in international settings, we are often asked to walk a fine line between exposing our students to current events and cultivating global citize
View
article
Think Equal: Teaching Children to Love not Hate
The #thinkequal innovation teaches our children to love not hate, to love oneself and all others regardless of background, gender, colour creed, ethnicity, etc. Its programmatic tools are narrative pi
View
community article
How Are HundrED Innovators Forging a Gender-Equal World?
International Women's Day is a global day celebrating the social, economic, cultural and political achievements of women - while also marking a call to action for accelerating gender equality. We aske
View
Load more