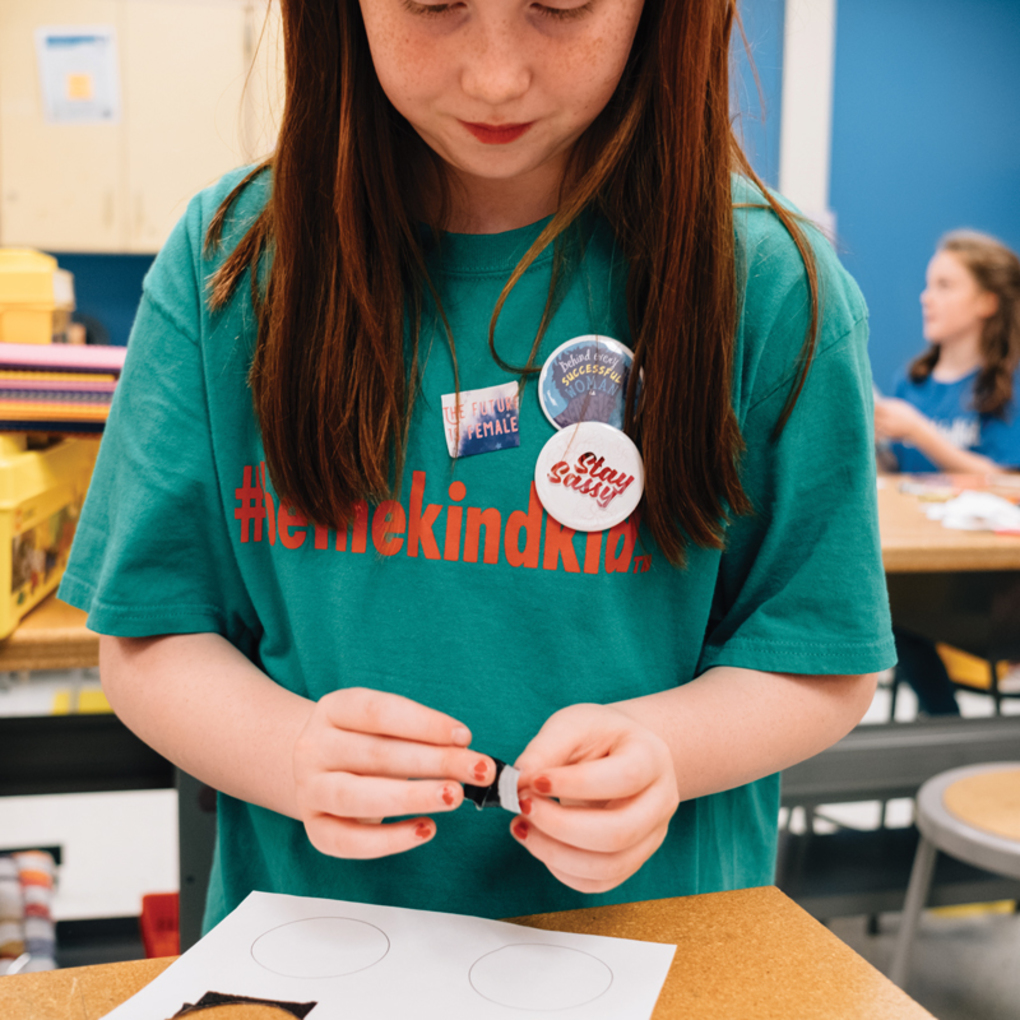 Ohio Township, Pennsylvania, USA
When two first-grade girls came to their teacher with the idea to start a business that donates profits to charity, a maker-learning program became an incubator for young entrepreneurs. When the girls started making products to combat bullying, the business became a catalyst for kindness in the community.
Empathy, Entrepreneurship, STEM, Charity, Making, School Business Partnerships
Introduction

“Our community is changing as a result of this program. Bus drivers wear the shirt! So do police officers, cafeteria workers, dentists, the list goes on. These four simple words have come to mean so mu”

In 2016, first-graders Julia and Amelia approached their teacher Maureen and asked if they could start a business that sold products made in their school’s makerspace and donated the profits to charitable causes. That day, JAM was born, named for three co-founders’ first initials.

JAM began selling simple products like keychains and “tin bins” (mint tins that are repurposed into containers for fun themed items or craft kits) to people at their school. Each product that the girls produced sold out, and soon they were welcoming more JAM members who wanted to help.

Soon, dozens of girls (and boys) were developing maker and entrepreneurship skills to support causes they cared about, from cancer research to hunger. But something else was happening, too—by putting students in charge of what to make, JAM was creating space for the development of products that could change the world.

One day at school, a kindergarten JAM member experienced bullying, and it gave her an idea: what if JAM could make and sell a way to identify the kind people? JAM members started making buttons with a simple message: #bethekindkid.

Buttons became #bethekindkid T-shirts, and JAM has now sold thousands of shirts—it’s impossible to turn a corner at the school without spotting someone wearing one. This simple phrase has spread kindness around the community, from students and teachers to cafeteria staff and parents.

#bethekindkid has helped the ideas behind JAM spread to other schools: four JAM clubs have formed at nearby schools. Each is as unique as its student members, but they’re all creating opportunities for young entrepreneurs to make a difference.

Read more ›
Innovation Overview
5 - 13
Age Group
18 500
Children/Users
1
Country
2016
Established
Not-for-profit
Organisation
1 830
Views
Focus areas
Empathy, Entrepreneurship, STEM, Charity, Making, School Business Partnerships
Tips for implementation
In order to implement this innovation, two critical components are required. First, an adult sponsor that is willing to do whatever it takes to get things done. Second, a group of students that have a desire to make positive changes in their lives and in their community through the art of making.
Contact information
M
Maureen Frew
Pittsburgh, Pennsylvania
Media

01
Find a sponsor/s
In order to start a JAM, you will need a sponsor/s that are willing to do whatever it takes to get the mission of the group done! Sponsors must believe in the power of making - students using their own hands/minds to create a product.
Read more
02
Administrative Support
In order for your group to be successful, you will need to find a member of your administrative staff that is willing to support the sponsors and members of the group.
Read more
03
Find your Members
Find students who are interested and willing to participate in the making/kindness movement.
Read more
04
Making
What will you make to sell to your community?
Read more
05
Making the Product
The students must first be taught how to have the materials ready for the construction of the intended product. This ensures that the process runs smoothly, and the stress level is kept to a minimum for all involved.
Read more
06
Donation
Where will the profits go to?
Read more
07
Procedures
JAM had to decide how we were going to handle our money situation.
Read more
08
Sending Donations
JAM girls are involved in all aspects of the money making procedures.
Read more
Show more