We are using cookies to give a better service experience. By using our services you agree to use cookies. Read more
Accept
Reject
search
Search
clear
/en/articles/the-playgrounds-combatting-poverty-in-ghana-and-mali
https://cdn.hundred.org/uploads/article/cover_image/448/wide_wide_Playgrounds.jpg
article

The Playgrounds Combatting Poverty in Ghana and Mali

Homework. For most of us, it was an area to avoid at all costs. We probably all ended up spending more time coming up with reasons for why we hadn’t done it than it would’ve taken to have completed it. It’s easy to take it for granted, but homework can actually be a useful ingredient in education to help propel learning onwards, which is a luxury that not everyone has.

In developing nations, rural communities often require their children to go to work after the school day. Therefore, the only time they can do their homework is in the evening, but with no electricity and no lighting they can’t.

Falling behind in school means that many children end up dropping out. Without education, the poverty cycle can’t be broken out of, and so many people become trapped within it.

Empower Playgrounds is a not-for-profit initiative that provides play equipment which harnesses the energy of the children and uses it to charge lanterns. School children take the lanterns home with them so that they can study in the evening after their work. 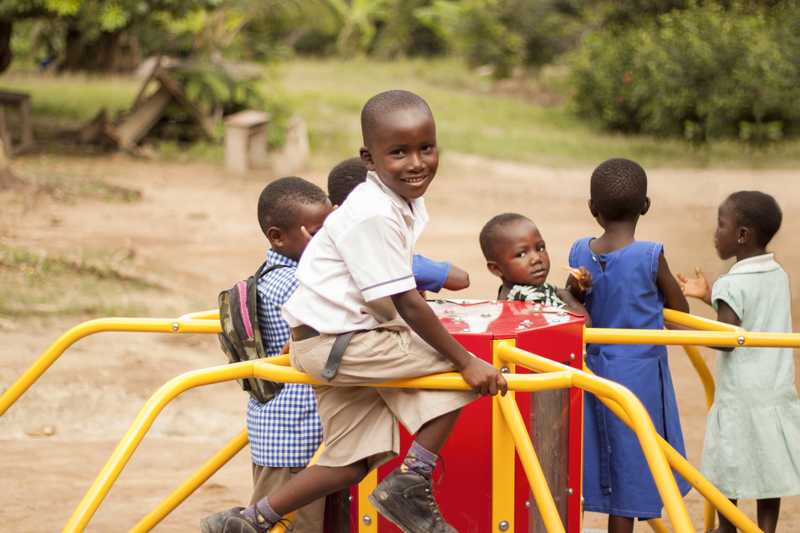 Empower Playgrounds provides the equipment and their expertise for free, receiving funding from organisations and private donors in order to carry out their work. They were founded in 2007, with their first merry-go-round in action in 2008. They currently have fifty merry-go-rounds in Ghana and one in Mali.

Countries like Ghana are almost split into two different countries. The big cities are just like any other in the world – with electricity, lighting, shopping malls and fast food outlets.  In rural areas there just aren’t these kinds of resources. Schools are mud huts, which often don’t even have a bathroom area. The expenditure difference is massive between the two areas, with approximately 53 dollars invested in education in the city for every 12 dollars invested in countryside schools. 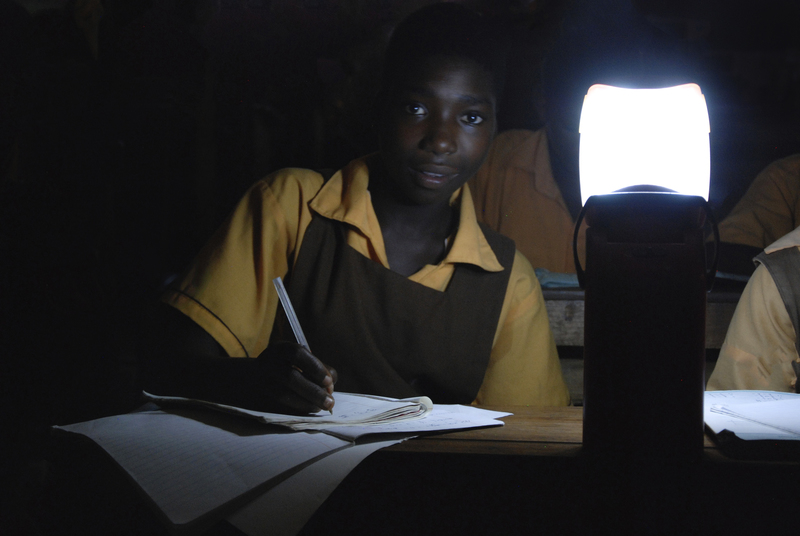 Rural areas therefore need outside investment to help bridge the gap and help those trapped in poverty to educate their way out. By having portable lights students can take home, Empower Playgrounds is enabling children without electricity in their homes to be able to study to make sure they keep up with their education.

Students are arranged into groups of those who live near each other (usually four to five children) so that there are enough lights to go round. Not only is this an efficient use of the resources, but it creates study groups where children can gain support from each other. An effective way of learning is presenting and talking through ideas rather than just reading and writing and so working in groups is a great idea that developed countries can learn from!

Each group has a ‘lantern leader’ who organises the groups. Girls are strongly encouraged to take this role to help promote gender equality. The group together assembles the lanterns and then study areas such as spelling, math, and reading together, along with their individual study.

"Each group has a ‘lantern leader’ who organises the groups. Girls are strongly encouraged to take this role to help promote gender equality."

It’s one of the most popular aspects of the initiative, as older and younger children work together and can teach and support each other through their studies. It also creates a community around education as they’re all grouped together based on where they’re from, which helps to encourage the idea of education which may still be a strange concept to some.

In a setting where even electricity isn’t an everyday occurrence, it’s fantastic that young people are being exposed to technologies that they otherwise wouldn’t ever encounter. The merry go rounds have plexiglass on them so the children can see  the motor inside so they can see they are having an impact. The scientific ideas they can learn from the playgrounds are continued into their lessons. Empower Playgrounds supports the teacher and supplies them with science materials so that students can learn about the process behind their lamps.

Empower Playgrounds is unique in the community engagement and support they offer the communities they work with. They cultivate a relationship with the community and have certain criteria that needs to be met in order for them to implement their project in an area. 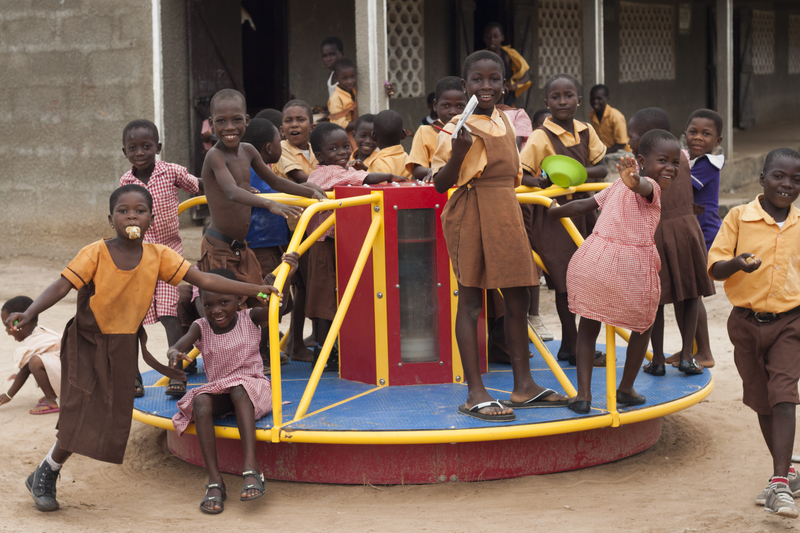 Children play on the playgrounds, which uses their energy to charge lamps.

They don't just deliver the goods and leave them alone, they hire local people to gage the need for the programme and whether it will be successful in that area. For example, if there's a danger that parents might steal the lamps, there needs to be in place a headmaster who is able to organise and manage the lantern groups to prevent this from happening.

They have also researched into similar projects and figured out why they aren't sustainable. For example, solar projects are increasing in popularity but if no one understands how they work and if they don't have an engineer to fix them when they break then the project comes to nothing. Empower Playgrounds has a system in place to keep track of their projects, assist where necessary, and make sure the relationships with the schools are ongoing and that they receive the necessary support.

All merry-go-rounds are visited once a year by the Empower Playgrounds team to make sure they are still working. They even deliver new science kits for them to incorporate into their schools to help maintain the systems in place and invigorate science lessons.

"Empower Playgrounds is already helping over 10,000 students keep up in education."

Through their own qualitative research, they've seen a 20% increase in school enrollment since they've begun their work. The effect of the beautiful and bright equipment being installed is a massive draw for families in itself. It's not an outsider coming in and installing it, Empower Playgrounds employs local people to install the equipment. Seeing the amazing play equipment being installed in their communities gives local people a sense of pride and support, and is exciting! This helps to convince more parents to send their children to school. 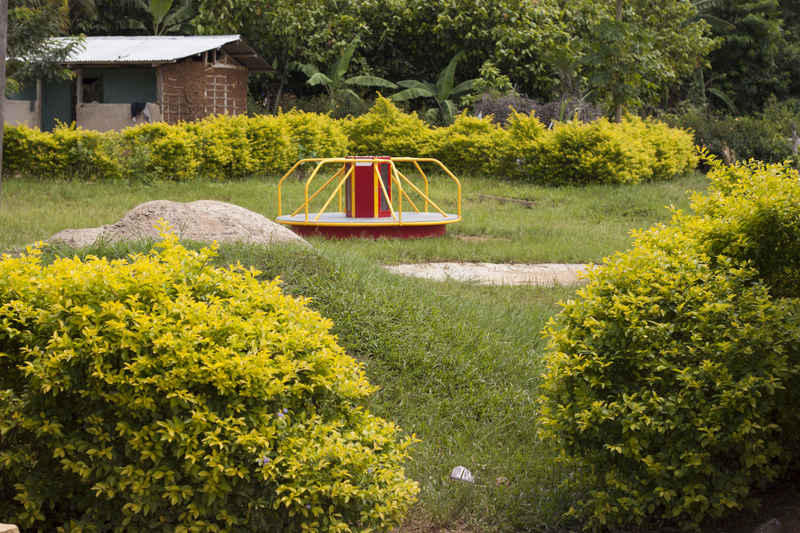 'Seeing the amazing play equipment being installed in their communities gives local people a sense of pride and support...'

Having the lamps also means that teachers are supported to do their work properly. They can set more substantial homework which has resulted in an increase in knowledge retention. Instead of having to repeat the same things over and over across days of lessons, teachers can expect students to know the answers when they come in to school so they are able to review their work in class rather than getting stuck in a cycle of repetition. This allows deeper learning to happen, as well as empowering both the teachers and the students.

Wherever we are in the world, we can learn something from Empower Playgrounds example. In a developed area, why don’t children’s playgrounds create the energy for schools? Wouldn’t it be great to have renewable energy technology in schools for children to learn about first-hand that can be incorporated into science lessons?

Group learning is also a greatly beneficial practice that would be amazing to incorporate into homework practices, where older and younger children work together on their homework. Being able to build a strong community feeling in our schools could only help in today's climate, especially in fractured societies such as in the West currently.

Empower Playgrounds, you’re lighting the way for the rest of us.

“Empower Playgrounds is already helping over 10,000 students keep up in education.”
Innovations

Is This The Best Kindergarten In The World?
Fuji Kindergarten was showcased by the OECD as one of the best school buildings in the world and we’
Grab Your Backpack, We're Going Unschooling
Homeschooling is quickly becoming a viable option for many families across the world as they witness
Another Way To Be #Authentic
Just when you thought there couldn’t possibly be another way to be #authentic, whether that be in yo
RECOMMENDED FOR YOU
article
Are We Ready For Boys In Skirts?
Progressive schools are updating their school uniform policies to allow boys to wear skirts and girls to wear trousers. We explore how the skirt is becoming the new symbol of gender imbalances in educ
Gender Equality
View
article
Here Come The Girls! The Projects Fighting For Girls' Freedom
Here at HundrED we believe that education is one of the main steps to helping girls escape the poverty, trafficking, child marriage and many other obstacles that girls face the world over. The good ne
Gender Equality
View
article
Campus 2016 : from Pulled Oats™ to Donald Trump
This year Campus was hosted in Finland’s largest movie theater auditorium, where 700 teachers came together to hear about the latest innovations and research into educational methods from across Finla
Gamification Professional Development Robotics Sustainability
View
article
The Teacher-Led Innovations That Prove Education Really Can Be Changed From The Ground-Up
Here at HundrED, we think teachers have the most important job in the world – educating and preparing the next generation. This year's World Teacher's Day (October 5th) coincides with our launch of 10
Math Professional Development Sustainability
View
Load more