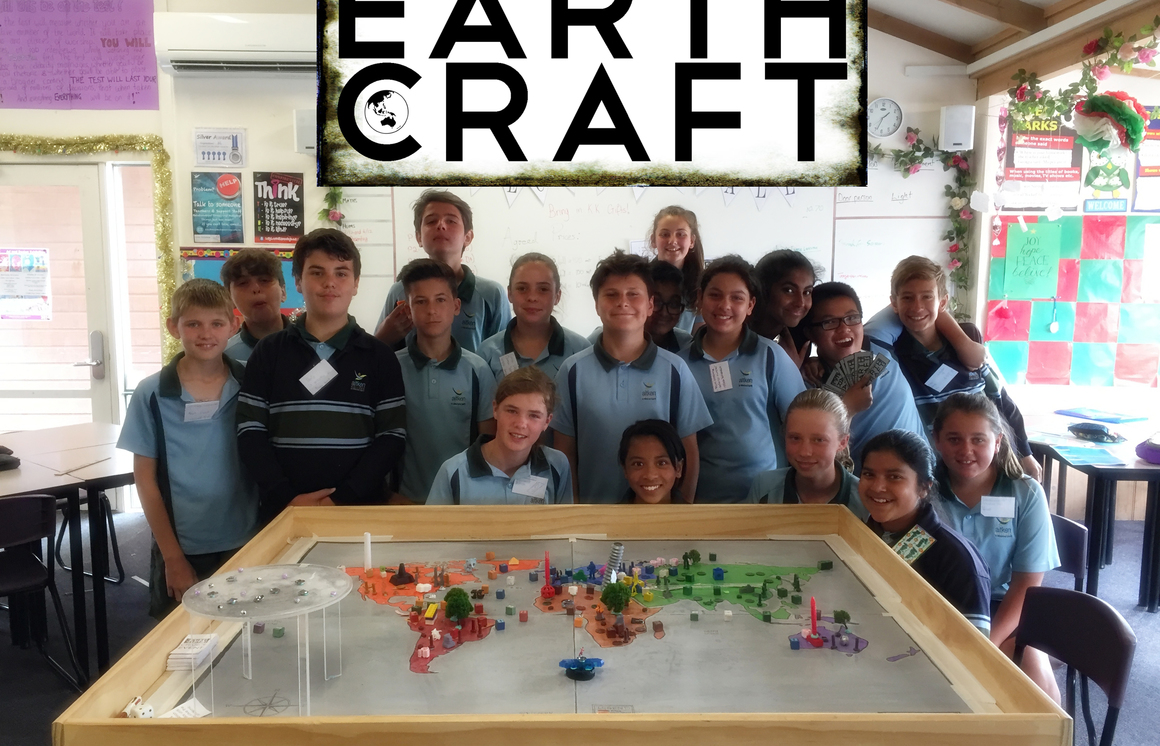 In EarthCraft, students are thrown in the deep end. They have to solve all our world's real problems by thinking critically and creatively, working together, communicating deeply and collaborating spontaneously. Every student comes out with a better appreciation of their world and important skills to help shape it.

EarthCraft is an international political simulation game that gives students an opportunity to control the world and try and deal with an overwhelmingly large number of realistic “Earth Challenges”. It was designed with Year 6 students in mind but it could easily be played by students of any age from about 11 years old and up.

Students are put in teams: six continent teams, the World Bank, the UN, Greenpeace, the Palestinians, Anonymous (the hacktivist group), and “the Fates” (two students who help run the game)

Each team is given a whole list of “Earth Challenges” that they have to solve, they are military, political, ethical, environmental and economic in nature (e.g. border disputes, land rights, water issues, nuclear meltdowns, stolen heritage, inflation…)

We have open negotiations where students talk, discuss, argue, come up with plans, invent things and policies, then each team has a ‘turn’ where they come up to the board and announce what they’re doing that ‘game day’ – they take actions e.g. table treaties, announce war, mine for minerals on the moon, solve Earth Challenges – then back to open negotiations, then on to the next team

The core mechanism of the game revolves around solving the Earth Challenges while keeping ahead of resource concerns: food, energy, steel and cash. They earn and use up these resources each game day.

In EarthCraft there are eight teams (six continents plus Palestine and Anonymous) as well as the UN, the World Bank, Greenpeace and the ‘Fates’. Each team starts off with a unique set of problems. The object of the game is to solve all of the Earth Challenges and have improved global wellbeing. Fate will let teams know whether their actions have been enough to solve each challenge. EarthCraft is hard, and there is no one way to win it – your group will have to use wisdom, intelligence and compassion to succeed. As well as solving all the Earth Challenges, the world as a whole needs to improve global wellbeing. This is done by: No team can have zero cash, steel, energy or food (unless they started without that resource)

Each team has problems they need to solve. The kind of problems are sometimes ones that they can solve alone, sometimes ones that they can solve with the help of one or more teams, and sometimes the problem requires the whole world to band together. For some challenges there is a suggestion of how to solve the Earth Challenge but you can solve it any way you like, as long as it deals with the problem and the Fates are happy with your solution. The Earth Challenges will affect what you put on your budget form so make sure you read them all carefully and include all of their negative effects in your book-keeping. Also you will need to tell other teams the effects that your Earth Challenges have on them.