We are using cookies to give a better service experience. By using our services you agree to use cookies. Read more
Accept
Reject
search
Search
clear
/en/articles/looking-back-at-previous-hundred-innovation-summits-and-why-you-don-t-want-to-miss-one
https://cdn.hundred.org/uploads/article/cover_image/1299/wide_HundrED18_c_Petri_Anttila__MG_7995.jpg
article

I distinctly remember that date being the first time I learned of the HundrED. I know this because I have an email sent to our Leadership Team on that day simply stating,

We really need to be a part of this!

At the time of that email, it was just the Finland 100 that was in existence, but the scale of what the HundrED was striving for and achieving in the process was not lost on me. Coming up with a brilliant idea is challenging enough, but spreading the word of your innovation is another matter indeed. Here was an organization dedicated to doing just that, and making the world a more connected and better place in the doing. I fully believe that the HundrED’s Theory of Change (determine the direction, identify impactful innovations, and implement soundly) is a formula for success and a much-needed catalyst for organizations in a time of over-saturation.

Fast forward almost two years later: not only was THINK Global School selected as a global innovation for the second year running, but I was in attendance at the HundrED Innovation Summit 2018 as well. It’s one thing to admire something online, but seeing it in person is another thing altogether. 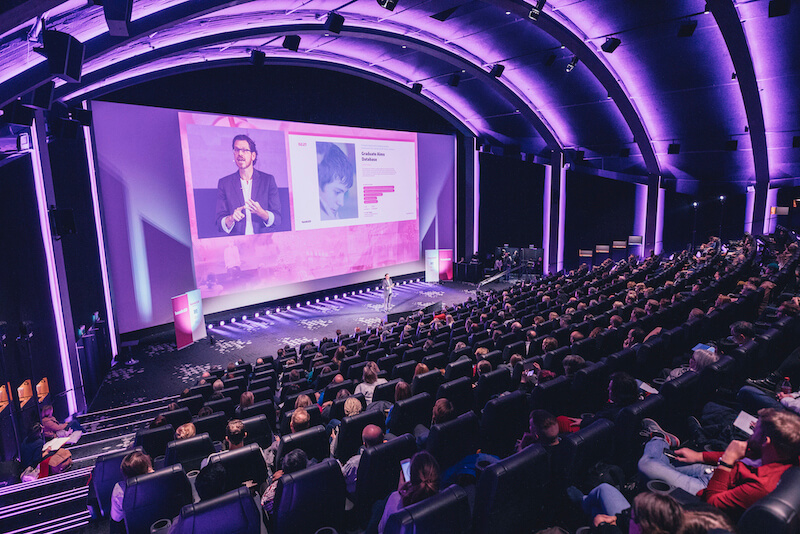 I’ve traveled a decent amount in my life but had yet to visit Scandinavia. It was a region that was at the top of my list of places to visit, though, especially Finland. Some of that stems from my hometown hockey team the Dallas Stars always seeming to have a few outstanding Finns on their roster (we were even called Helsinki South for a while because there were so many of them). Their quirky personalities (all of them really seem to love heavy metal) and talent with the stick were endearing enough that it made me want to travel there, to see what the country was really like.

Going in I knew that Finland was highly respected for its contributions to education and that the people, unlike the climate, were known to be warm. My week in Helsinki confirmed both. I loved the self-effacing nature of individuals like organization head Saku Tuominen, who made myself and everyone in attendance feels a genuine part of the HundrED (Helsinki mayor Jan Vapaavuori, who made a speech during a celebratory dinner one night, also displayed the humor and warmth that I came to associate with the Finns). I think that might actually be my largest takeaway — it’s easy to see why the HundrED originated here because Finland is a place accepting of new people and new ideas and by staying true to itself, largely just gets things right.

I had my first “Wow!” moment of the week when myself, Head of School Jamie Steckart, and THINK Global School founder Joann McPike attended the opening ceremony at the Finnkino Tennispalatsi. It was immediately apparent how much time, effort, and care were being put into the summit by everyone involved, and how friendly everyone who I’d interacted with online were in person (Pukhraj and Jessica to name a couple). 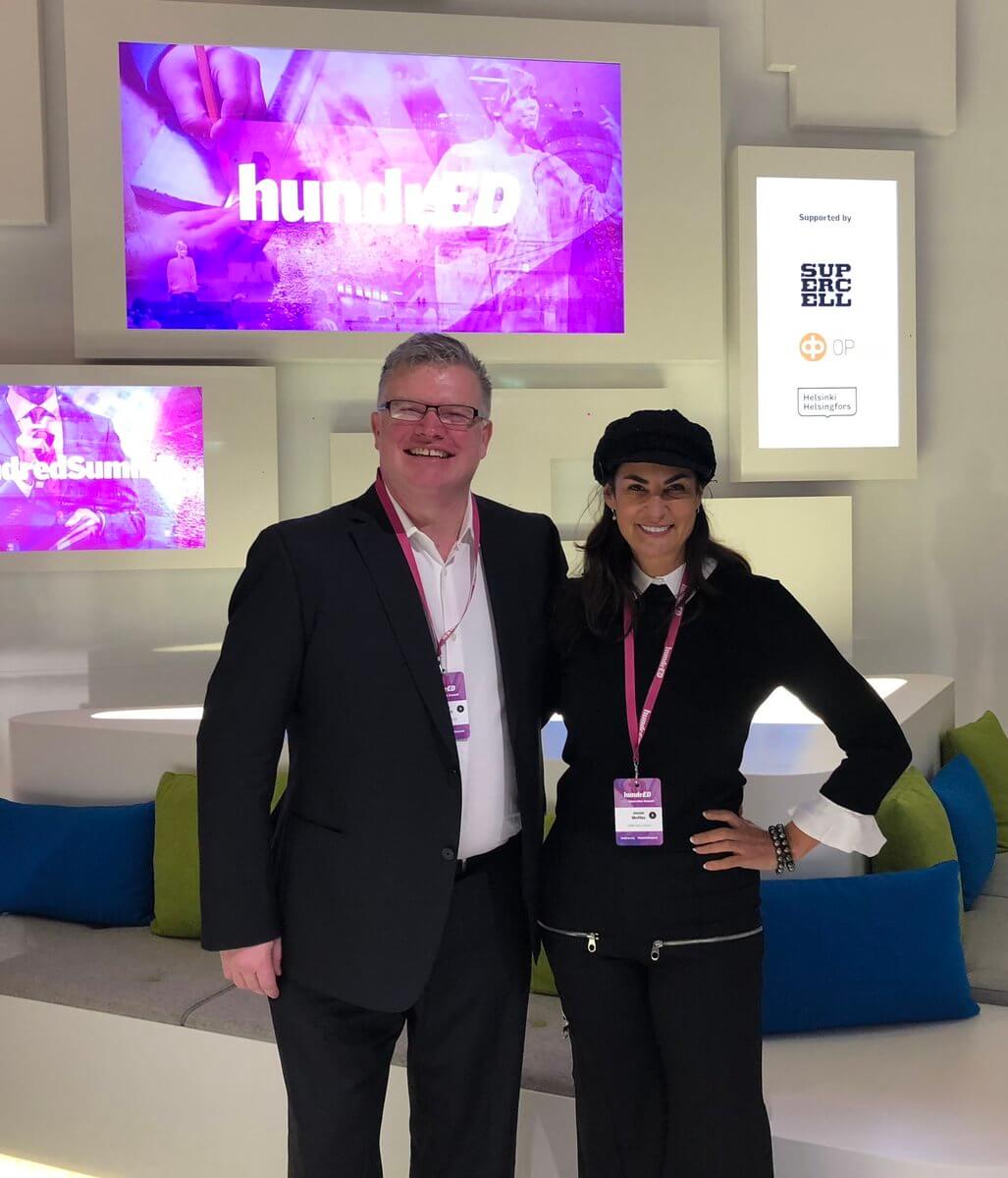 I also realized during that opening event how the HundrED were smartly leveraging the ingenuity of youth. Every time I’ve attended a TEDxTeen event in London or NYC, it’s apparent that brilliant ideas are bubbling in the minds of children worldwide and they just need a springboard to make a meaningful impact. Heck, I work for a school that has the explicit goal of providing students with the tools necessary to bring about change. So to hear Jordy Angel Coldwell use her voice during the opening event to make a statement on behalf of all students across the world was proof enough that our future is in capable and caring hands (and after Greta Thunberg’s triumphant actions recently, I’m even more convinced this is the case). Since last year’s summit, two of our THINK Global School students have joined Jordy in becoming HundrED youth ambassadors, so props to them.

Living in America, where our education system is more chastised than celebrated, it was a breath of fresh air seeing the pride with which educators and the HundrED approached Helsinki Education Week. Every day during my time at the HundrED, I was surrounded by engaging people who were working on interesting things, no two conversations ever the same. I shared details on our labor of love THINK Global School while learning about innovations that impact every age level and more importantly every socioeconomic status and gender. 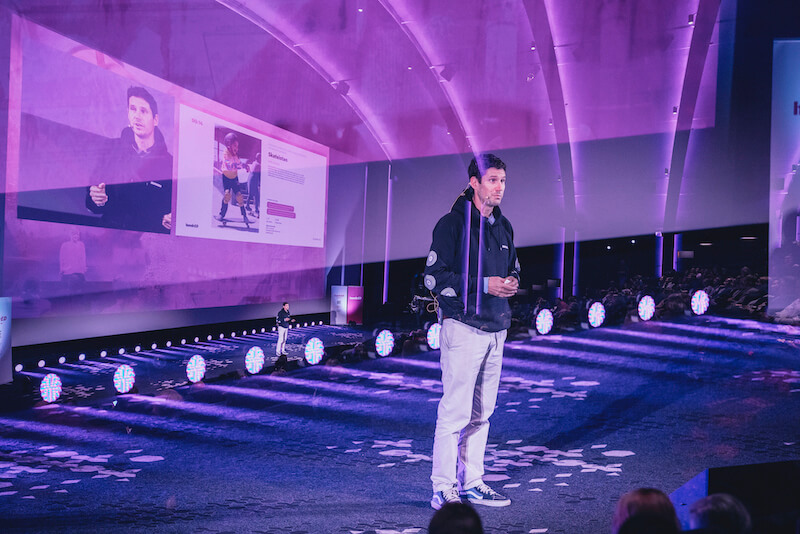 One example of an innovation spotlight that really appealed to me was Oliver Percovich’s Skateistan. At THINK Global School, I’ve had the opportunity to speak candidly with two of our Afghani students over the years, and hearing the hardships they’ve endured is always eye-opening and sometimes heartbreaking. Even when they were traveling with our school, the knowledge that their friends and families could be bombed at any time was a millstone around their neck. So to hear Oliver speak of his organization Skateistan, which empowers Afghani youth (and in particular girls, who don’t have the outlet of sports like their male counterparts) through skateboarding was nothing short of heartwarming.

To me that’s the value of the HundrED: there are incredible things happening all across the world that deserve attention, and the HundrED has done an incredible job of making the discovery process a simple one. To harken back to my own discovery of the HundrED, even in its early stages, they presented all of the Finland innovations in such a concise and professional way, I was immediately able to recognize the value. 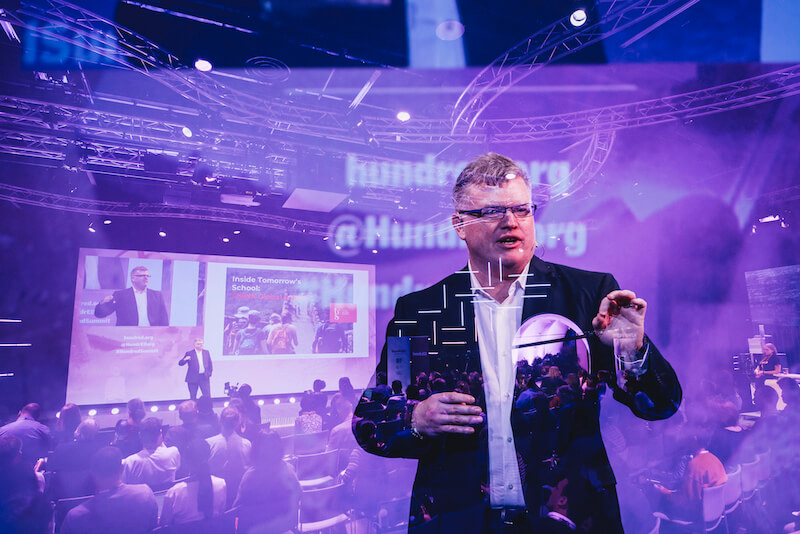 It was also a joy to see Jamie, our head of school, communicate all of the work that we’ve put into our innovation to those gathered in the Nokia Executive Experience Theater and watching across the world. We are best known for our travel component, but it’s fair to say that Jamie was the architect of what makes (in my mind, at least) THINK Global School so transcendent: our Changemaker Curriculum. Student choice is central to that, and I highly recommend everyone check out his involvement on last year’s Inside Tomorrow’s School panel to learn more about how we approach education.

One other talk that really resonated with me was the closing talk by “the world’s least powerful CEO” Ilkka Paananen. Hearing him speak about the organizational culture at mobile game developer Supercell and how their success comes from putting power in the hands of their employees rather than taking a top-down approach really, I mean really, resonated with me to the point where I put it into action following the conference. Ilkka really couldn’t have summed it up any better than this quote, “It turns out when you let go of control and trust other people, good things can happen.”

Miro Heiskanen, a twenty-year-old defenseman from Espoo, Finland, flashed incredible potential for my Dallas Stars last year and looks to be leading the charge for years and years to come. I know that the HundrED will be doing the same for the world of education, and I look forward to attending the Global Innovation Summit again this month.

Didn't get an invite? No worries, you can join us by watching the live stream all three days! More info at https://hundred.org/en/summit

HundrED Innovators To Make A Mark At The 2019 Helsinki Education Week
Helsinki Education Week is an official side event for Finland’s Presidency of the Council in the Eur
HundrED Innovation Summit Program For November 2019 Is Now Live!
The 2019 Innovation Summit brings a renewed focus on our mission to help children flourish and provi
RECOMMENDED FOR YOU
article
It's Time to Assess Assessment
A recent study in the UK revealed that when children, in low performing categories, receive cash or prize rewards for good marks in their GCSEs they perform much better in key subjects such as maths a
Assessment
View
article
Are A-Level subjects in the UK representative of the skills students need?
Art History and Creative Writing are just two of the latest A-Levels to be axed from the state curriculum in the UK...
Assessment Assessment Professional Development
View
article
Nature vs Tech - The Battle For The New Classroom
Why do we still force children to sit in rows facing the whiteboard, when few of us believe this actually stimulates learning? Part of this could be due to our belief that learning should be serious w
Nature Sustainability
View
interview
Maarit Rossi On The Future Of Teaching Mathematics
Maarit Rossi was nominated for the Global Teacher Prize 2016 and she was chosen as one of the top ten best teachers in the world
Education Events Education Policy Math Numeracy Professional Development School Leadership
View
Load more