We are using cookies to give a better service experience. By using our services you agree to use cookies. Read more
Accept
Reject
/en/articles/empathy-is-the-only-way-to-stop-the-cycle-of-bullying-and-abuse
https://cdn.hundred.org/uploads/article/cover_image/628/wide_w1140_el.jpg
article

‘I was deeply distressed by the suffering of children who cannot defend themselves. Bullying is a pernicious pervasive problem and I don’t know how we’ve allowed ourselves to overlook it and just say “oh everybody goes through it, it’s a ritual and you’ll get past it.” If children had a wound that was bleeding we’d run for band-aids, but just because the wounds are inside we have been able to overlook the pain of children. So I wanted to draw the curtain on cruelty and I wanted to understand why are we so cruel to one another and why do we not defend one another?’

Mary Gordon got straight to the heart of the painful problem of bullying at our Summit back in October 2017, articulating an issue that everyone of us has experienced ourselves or those close to us have – perhaps even our own children. Similarly to mental illnesses, bullying is something that we tolerate and don’t take too seriously, just because we can’t see the effects physically on a victim and due to an archaic stiff-upper-lip attitude.

It’s high-time that we took this issue seriously and that’s just what Gordon’s done. Whilst working as a kindergarten teacher, Gordon became aware of the injustice with which children were living in. ‘Some little ones were ready to learn and happy and full of hope and joy, and others were defeated before they’d even crossed the classroom door. So it’s all about family,’ Gordon told us.

Witnessing how even at the very start of life some children are a step ahead of the rest, Gordon decided she needed to do something about it, so she set up Roots of Empathy. But just because our family backgrounds have a huge connection to the root of the problem, Gordon doesn’t think schools should demonize families, explaining, ‘I have a very deep belief about the positive impact of family. In schools we tended to think that families were the problem, well I believe that family is the only solution and that if we didn’t bring families into respectful relationships with the schools, we would never change any of the injustices.’

Robert Frost, the poet, says, ‘home is a place where when you go there they’ve got to take you in’ which Gordon thinks is pivotal when thinking about cruelty and bullying. Gordon realized that ‘the people who are doing the bullying, people who were doing domestic violence, hurting their children, causing tremendous suffering both mentally and physically; the common denominator was the absence of empathy. So I thought, well how do you get it and what does it cost?’

Empathy is our ability to understand and truly feel the emotions of another and is therefore the crucial boundary that prevents us from inflicting pain on others. When someone has a lack of empathy, inflicting abuse (in all its myriad forms) is easier, particularly in the heat of the moment. Although empathy can be encouraged at all ages, it’s most effective to develop this as early as possible to truly break the chain of abuse.

Focusing her work on finding an answer to this cyclical abuse, Gordon came to realize that it’s the parent who has the most power in this situation. ‘I realized the generational cycle of violence, bullying and bad parenting. My innovation would be to break that cycle. So Roots of Empathy is about breaking a cycle of violence, bullying and poor parenting.’

Gordon researched over three continents how to prevent violence and abuse. In every single continent the results were the same, ‘All of the research says when empathy goes up, violence, aggression and bullying go down.’

Roots of Empathy sees babies brought into the classroom with a qualified instructor present and the baby’s parent. Young children then watch the baby and answer questions prompted by the instructor. As Gordon explains, ‘Roots of empathy is about building children who will be able to participate in the world, in their families, in society and in their classrooms. They will become agents of peace and agents of joy. The effect is emotion. We take that attachment theory and bring it into the classroom. We show children what love looks like.’ 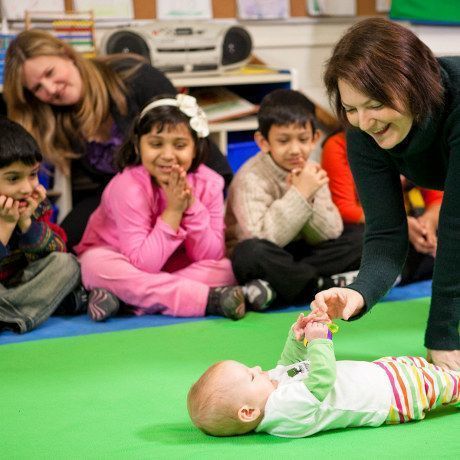 Roots of Empathy session, where babies become the teachers

The Roots of Empathy instructors are specially trained and have access to large amounts of curriculum and mentoring in order to provide effective sessions in classrooms. But Gordon is keen to note that this doesn’t mean the class’s usual teacher isn’t important. She sees Roots of Empathy as a gift for teachers, ‘The gift is that teachers will be able to see their children in a way that they’re never able to. Teachers are so busy, you can never sit back and see your children as people, never see the wondrous contributions they can make when you’re speaking to their emotional sides rather than what they know. Roots of Empathy doesn’t care what you know, because that can change tomorrow anyway. We care what children think and feel.’

Gordon is aware that many people will view Roots of Empathy as a ‘fluffy’ programme, bringing babies into classroom may not be taken seriously but it should be. As Gordon explains, ‘It’s about the future, about the next day, about the legacy we have for our children (...) I’m talking about the depth of the children, the leaders of tomorrow. We care about what they feel and what they think. We measure their mental health and their capacity to understand what others feel and to feel with them, which is what empathy is. We really listen to what children feel is in their heart.’

Babies who come into the classroom always visit every month for the first year of their lives. ‘The reason it’s the first year is because that’s where empathy develops, that’s where you can break the cycle’, says Gordon. ‘This is a social innovation. You cannot teach empathy. Empathy is not taught it is caught – experientially. The programme is completely experiential.’

In Gordon’s speech you’ll find a demonstration video of Roots of Empathy in practice. What you’ll notice is that the instructor only ever asks questions – eighteen questions in a minute and half in the example given. Roots of Empathy instructors also never give children the answers or praise a child or tell them they’re wrong. ‘We go with the principle of intrinsic pride’, says Gordon, ‘We don’t want any ribbons, stickers or medals. We want children to value what they think and they feel, not praise junkies, but to contribute authentically to the classroom only when they’ve got something genuine to ask about.’ 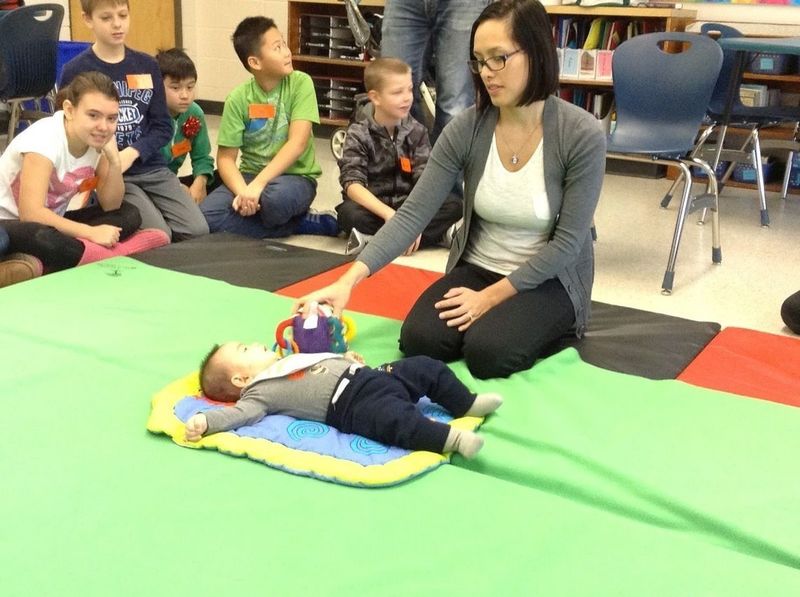 Gordon’s work has reached over 800 thousand children, which is amazing, but the true effect of her work can only be realized from personal examples. For instance, in the example included in Gordon’s talk there’s a little boy who was just learning to speak English but kept contributing and asking questions even though he found English difficult to speak in. When the baby in the session fell over slightly the Roots of Empathy instructor asked what had happened and the boy responded “she turned around to her mummy to ask if she was OK”, and the roots of empathy instructor asked, “what did the mummy say?” and he replied, “she said you’re good to go.”

That’s the key to Roots of Empathy, teaching children to pick up on non-verbal signals and to understand the unspoken interactions between human beings. When children are sensitive enough to pick up on these signals they are in touch with their empathetic skills and when this happens it makes it harder for them to turn to violence and abuse as a way of treating others.

"
Schools should be a homecoming for children, somewhere where every child feels they belong.
"

‘I think in the future of education the most important word is empathy. If they (children) have empathy they connect to each other. We have a crisis of connection in the world, we need to have empathic children. If children have a sense of belonging when they’re in school they will know how to include others. Schools should be a homecoming for children, somewhere where every child feels they belong.’

Changing the world in these turbulent, divisive times can seem utterly overwhelming. But education can be an antidote for a brighter future and is in essence a magnificent tool we have at our disposal, as Gordon says, ‘If you want to change the world you’ve gotta go to school.’

Luckily times are changing for the better, although it may be hard to see it. Gordon explains her work wasn’t taken seriously back in the eighties and nineties, saying, ‘I believe all learning happens in loving relationships. I used to say, back in the eighties, love grows brains. People used to giggle, thinking it was soft, now neuroscientists quote us. They say yes love does grow brains.’

We are fortunate enough to live in a time where empathy is finally being taken seriously. So it’s up to us adults to do something about it to make sure bullying and abuse is stopped right at the root cause, as Gordon says, ‘I think it’s up to us to protect childhood for children. To embrace change wholeheartedly but to hold onto the thread of tomorrow which is our children and to celebrate them.’

Find out how to organize Roots of Empathy in your classroom or watch the talk in full.