We are using cookies to give a better service experience. By using our services you agree to use cookies. Read more
/en/articles/discover-the-passion-behind-explore-by-the-seat-of-your-pants-with-joe-grabowski
https://hundred-cdn.s3.amazonaws.com/uploads/article/cover_image/1018/wide_b4_copy.jpg
article

I’m on the bottom of the ocean, over 3,000 m deep, surrounded by thousands of female octopus protecting their eggs, a sight no one has ever witnessed before. Ok, I’m actually sitting in a dark room, well it’s not really a room, it’s two shipping containers welded together. This room is not on the bottom of the ocean, but over 3,000 m above the brooding octopus, perched atop the Exploration Vessel Nautilus, in the Monterey Bay National Marine Sanctuary. The only light comes from dozens of glowing video screens, each one occupied by either a scientist, a remotely operated vehicle pilot, a video engineer or a navigator, all 100% transfixed by what we’re seeing. We’re not alone, hundreds, if not thousands of other people are there with us from around the world. The entire discovery is being broadcast in real-time, around the world, and as a science communication fellow onboard, I’m leading the conversation.

How did I end up in this amazing position? Simply by being a terrible teacher. Maybe that’s a little harsh, but 5 years ago I was not the teacher I had hoped I would be when I was spending a year travelling and scuba diving my way around Australia. It was during this time I realized I wanted to be a teacher, to share my passion for science, nature and what we’re doing to our planet with students. Fast-forward a couple of years into my teaching career and I had fallen into a routine of relying on the textbook and putting far too much pen to paper. It’s so easy to fall into this trap, as we all know, teaching is a job that spills well outside of the hours that you have students in the classroom. Evenings are often spent balancing home life with marking and preparing lessons for the following day. It becomes so tempting to look for quick and easy lesson options.

My ‘aha’ moment came from an online article, an article that reminded me of what stirred my passion for the natural world and exploring it when I was a kid.

This article was about Fabien Cousteau, grandson of the legendary ocean explorer Jacques Cousteau, who would be living and working on the bottom of the ocean for 31 days. What really caught my attention was that he’d be connecting virtually with classrooms from the Aquarius Reef Base, the world’s only underwater laboratory. I was determined that my class was going to be one of those classes!

Skip ahead two years and virtual connections with scientists and explorers had become a mainstay of my classroom. My students couldn’t get enough of these real world connections, seeing the science they were learning about actually applied in the field and getting to ask questions. They were being introduced to important and challenging issues, strange places and exciting STEAM role models and career paths. With a growing list of contacts around the world, I started the nonprofit Exploring by the Seat of Your Pants, to inspire the next generation of scientists and explorers. We do this by bringing STEAM professionals into classrooms as virtual guest speakers or to lead exciting virtual field trips. Since launching in September 2015, we’ve run well over 1,000 live events, connecting hundreds of thousands of students to scientists and explorers from over 60 countries. What we do is 100% free for classrooms everywhere and always will be.

There is no other organization like Exploring by the Seat of Your Pants! In the last few months alone, we’ve broadcast live into classrooms from the Arctic and Antarctica. We’ve had a wide variety of encounters with wildlife from remote locations including penguins in Patagonia, green sea turtles work ups with marine biologists in Mexico and elephant seals fighting for beach territory in California. We’ve had STEAM professionals join us as we tackled themes of ocean plastics, coral reefs, space exploration and women in science and exploration. In the process, hosting well over a hundred events with highlights that included finding plastics in the stomach of a seabird during a live dissection, a tour of a lab where they are locating and activating positive memories in the brain, a hangout with astronaut Terry Virts, and journeying 2km underground into a lab where they study particles from the sun.

Each month we run 25-50 live events for classrooms, all via YouTube Live. This allows us to have up to 8 classrooms from different locations join live on camera to interact, while streaming via YouTube so any number of classrooms can tune in. The events record to YouTube, creating a library that teachers and students can access at anytime. Each month, we have some special events using new technology to bring the most remote regions of the planet, live into classrooms. We send our textbook-sized satellite BGAN units into the field with scientists and explorers who can use them to video broadcast into classrooms from pretty much anywhere. We’ve broadcast from in the field on all 7 continents, from remote coral islands to deep within rainforests, from the tops of volcanoes to the heart of the Saharan desert. 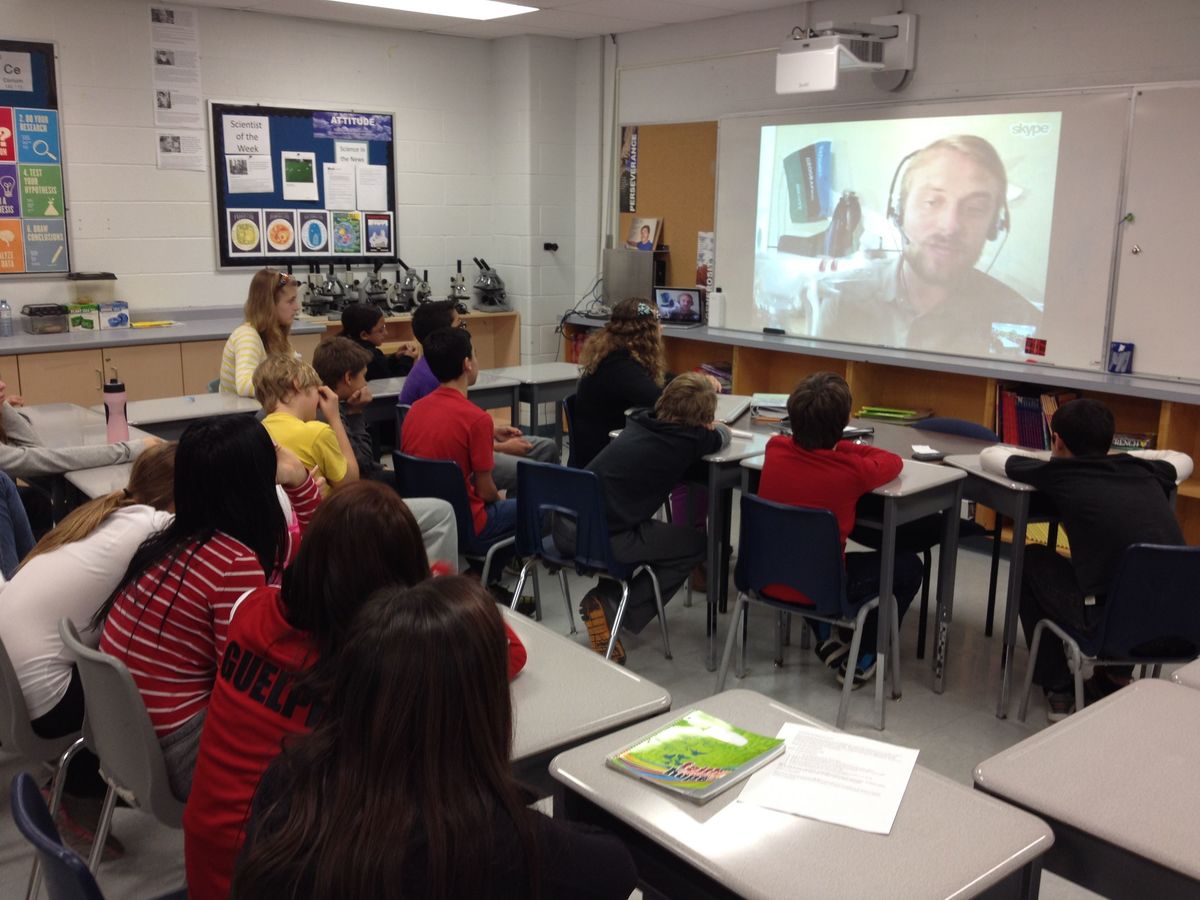 Most of us understand why it is important to bring STEAM into our classrooms. Science, technology, engineering, the arts, and mathematics should be the gateway to fostering experiential learning, open dialogue and student driven inquiry within your classroom. At the end of their education, students should leave the classroom as confident problem solvers, able to think critically using their knowledge and other’s perspectives, who embrace failure and take risks to produce innovative solutions to a variety of challenging problems. We’re preparing our students for jobs that don’t exist yet, so we have to provide them with skills that will be transferable to them.

So what makes these connections with STEAM professionals so powerful? There are some falsehoods that students hear early and they can be pretty persistent. The first is that you have to be really smart and well educated to be successful in a STEAM career. Every scientist and explorer has a story, coming from different backgrounds, and none of these stories are the same. They do have common themes, many of them have winding paths and changes in focus, often including several instances of failure, many of them weren’t successful in traditional school environments. Yet they all overcame obstacles and found success, they did it by embracing a passion and using the skills they had, however unconventional, to find their way and have an impact in their field.

Another falsehood is that there is nothing left to explore and discover. This couldn’t be further from the truth! We’re just scratching the surface of what there is to know and understand about our planet, the universe and us, and new technology that is still being developed will play a central role in unraveling these mysteries. Students need to meet oceanographers who can tell them that we have better maps of the Moon and Mars then we do of our ocean floor, biologists who can tell them that there are potentially millions of species left to be discovered, engineers who can show them telescopes that can locate new planets around faraway stars, and conservationists who are experimenting with innovative strategies to engage communities and bring species back from the brink of extinction. 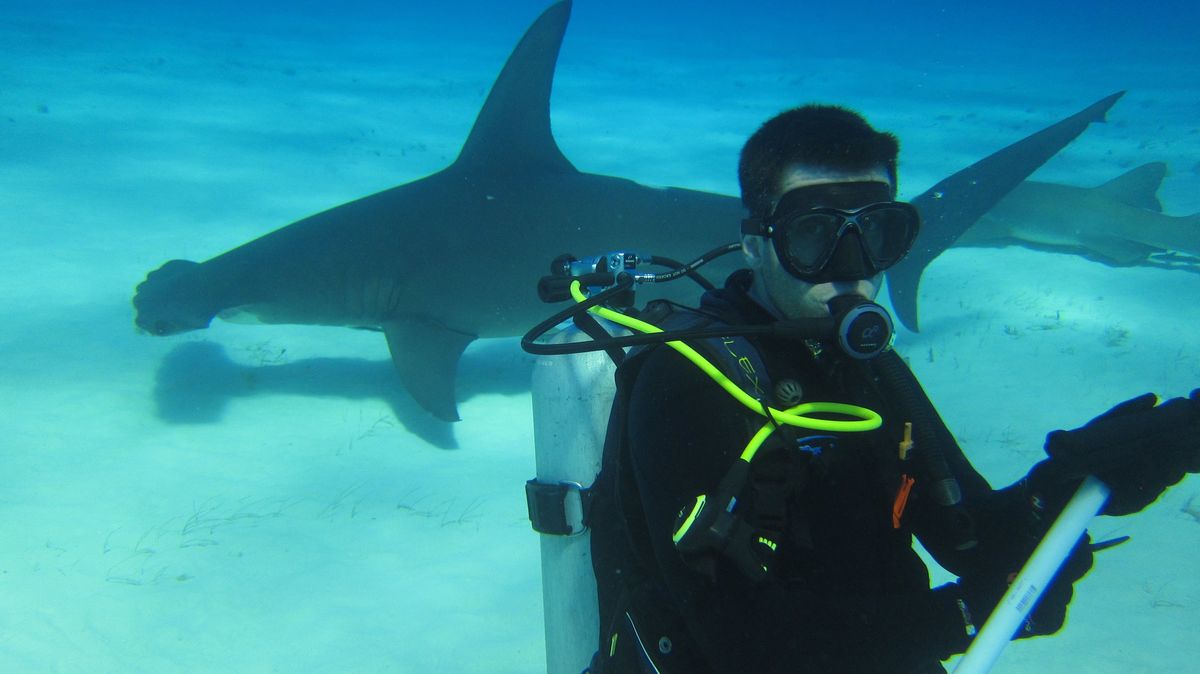 If we’re preparing students for jobs that don’t exist yet, who better to connect with than STEAM professionals who have made a career in a field that previously didn’t exist. How about a conservation technologist who uses maker technology to create sensors that can remotely monitor changes in ecosystems, or a creative conservationist who uses her art to shed light on the rhino horn and shark fin trade, or a photojournalist how dives deep into Florida springs and uses 360 photo technology to highlight their importance and how they are under threat. The possibilities are exciting and endless.

I facilitate these connections with classrooms across North America and we’re beginning to expand these opportunities to classrooms around the world. I do it to inspire the next generation of scientists and explorers.

I do it because there is a sense of urgency if we are going to inspire this generation to tackle the issue of climate change, which our generation has failed to do.

I do it to encourage students to become global citizens, to look outside their communities and realize that their everyday actions have global implications and that we’re not so different from each other. All of the scientists and explorers I’ve interacted with can look back to an experience, whether it was a person they met, a documentary they saw or a book they read, that inspired them, igniting a passion that led them to where they are today. It’s these little ‘aha’ moments that I’m hoping to facilitate for students all around the world through bringing these STEAM professionals into their lives.

Exploring By The Seat Of Your Pants is looking to scale their work to the UK and are looking for active partners to engage with their innovation. If interested, please connect with Joe Grabowski at the earliest! 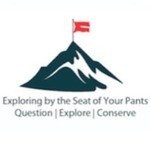 Exploring by the Seat of Your Pants