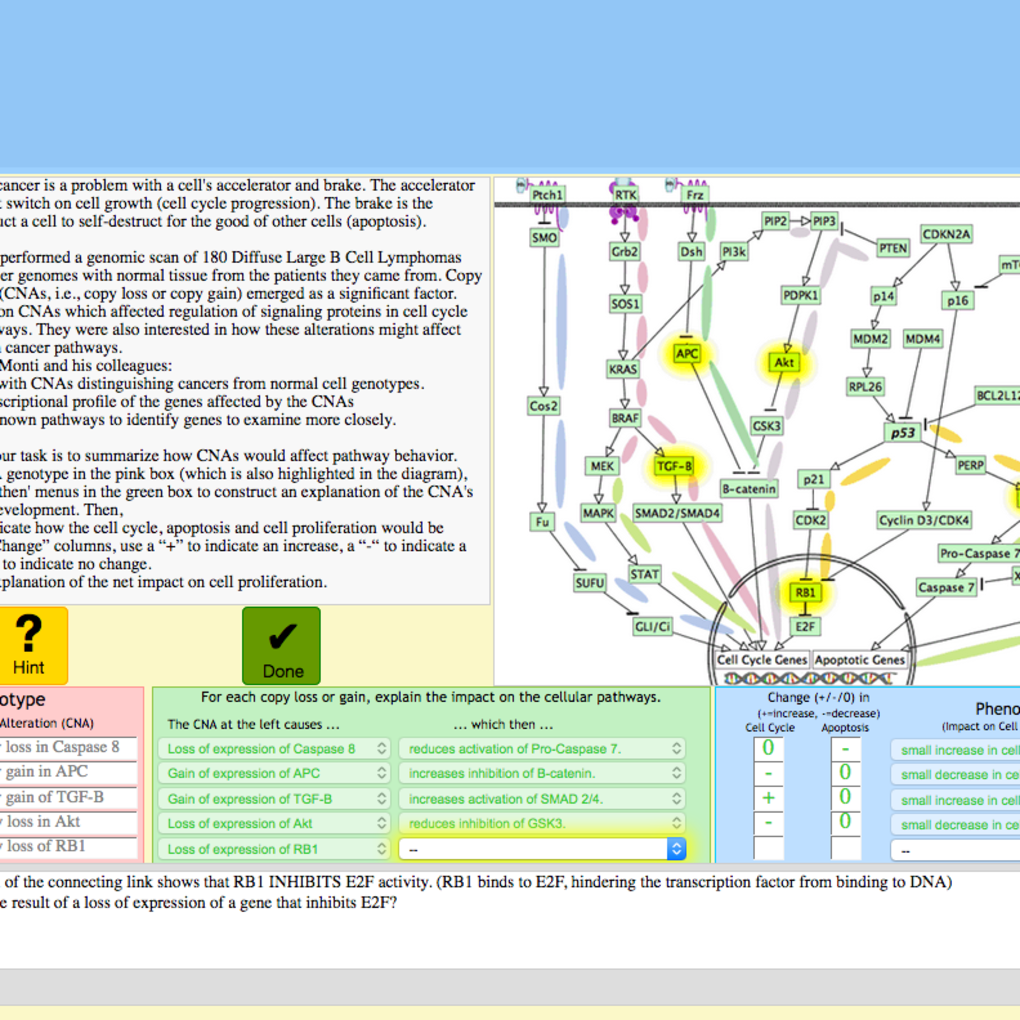 CTAG embodies a mental model for biology that we call Pathway Algebra, which helps kids simulate & explain theories in science.

The Cognitive Tutor for Analysis in Genetics (CTAG) is not just for genetics!

Carnegie Mellon University, Pittsburgh PA
Even with reforms, biology still overwhelms students with minutiae. Too often students end up being taught to fill in multiple choice tests, rather than appreciate the beauty of biology, which is changing our lives in ways few people fully understand. A modern biology curriculum should help students solve problems in areas like cancer and Personalized Medicine, which are changing our lives.
Introduction

“CTAG is laying the foundation for a revolution in high school biology education.”

Many people have contributed to CTAG over the years. Albert Corbett, one of the founders of Carnegie Learning, was the PI for most of the project. Aaron Mitchell, the head of the biology department at CMU, has played an important role, as has D.J. Brasier. Benjamin MacLaren has been a principle designer, and the principle developer since the beginning, as well as the source of the idea for Pathway Algebra as the basis of CTAG.

There is a logic for "assembly line" and "signaling" pathways that geneticists routinely use, which has not been introduced into educational settings, apparently because nobody thinks students could learn this advanced logic.  Using the widely successful cognitive tutor technology developed at Carnegie Mellon, we developed a curriculum for "Pathway Algebra" that has about a dozen and a half lessons in it.  It was originally developed for CMU biology majors, but we are finding that, when delivered in a cognitive tutor, AP biology high school students, and freshman (including art and drama majors) learn this logic quite well.

While innovative curriculums are being developed, they all require extremely well-trained teachers on a very large scale.  This is completely unrealistic.  As AP classes expand schools are struggling to find teachers even for traditional and outdated text-based approaches.  The demand is growing and the supply is struggling to keep up.

AFTER you've watched the introductory video above, you can see a more detailed description of the core lessons in CTAG  at:

Comment
I have been using CTAG for well over fifteen years. My students have found it very helpful in understanding how to think about and solve complex genetics problems. Students perform better on exam questions in the same topics than before we started using CTAG, as we have shown with the assessment data of exam questions over several years. I also know that during this time, the grades on questions related to areas where we used the cognitive tutors has improved, making me I am confident the improvement reflects the benefits of the Cognitive Tutor Of particular interest to me is that so many students wanted to take the course that enrollment nearly doubled, requiring me to offer a second lab section this year (2019). Handling this increase in student population would have been more difficult without the personalized tutoring and automatic grading that CTAG provides, and the immediate feedback students receive. Several students interested in taking genetics have actually mentioned the cognitive tutors as something they had heard was beneficial. Additionally, because of the tutors, we are also able to devote more time in lab to research projects in genetics. In summary, I have taught genetics to undergraduates at Washington & Jefferson College for almost three decades. Prior to my teaching the genetics course, there was no lab component. Students at that time struggled with the course, as has been historically the case for undergraduate genetics classes. I added a lab component when I took over, which helped students master material and learn to apply the concepts learned in lecture. However, with increasing material to cover, and with today’s students analytical backgrounds uneven, some still did not do well. Fortunately, the use of CTAG to supplement lecture and lab learning during the last two years has helped students who would otherwise have struggled in my genetics course. Performance in the course has improved, where over the last fifteen years, where now we see fewer grades below a B than before the tutors. I have thoroughly enjoyed using this tool that helps our science students achieve deeper understanding in problem solving. Alice G. Lee, Ph.D. Professor of Biology Washington & Jefferson College
A
Alice Grier Lee
Comment
“We are failing to properly educate our high school students in biology on a national scale. The biological sciences are changing faster than our public educational system can keep up with. This MUST change. I have used CTAG in my biology classes for over a decade. This web-based cognitive tutor for biology is laying the foundation for a revolution in high school biology education. This is not hyperbole. It goes straight to the heart of how to think like a biologist.” - Mark Krotec – Teacher of Biology and Chemistry at Pittsburgh’s Central Catholic High School since 1981, who has served as the director of extracurricular science (PA Junior Academy of Science, Science Bowl, Pittsburgh Regional Science and Engineering Fair, and the Envirothon) for over a decade, and is actively involved in the promotion of teacher education and curricular development nationally in his roles as an AP Biology consultant for the College Board, a master educator for regenerative medicine (bioengineering and tissue engineering), as the director of yearly Diocesan Science Teacher Enhancement Institutes, and as an executive board member of the Western PA Biology Teachers Association.
M
Mark Krotec