We are using cookies to give a better service experience. By using our services you agree to use cookies. Read more
Accept
Reject
/en/articles/hundred-webday-featuring-larry-berger-founder-executive-director-at-youth-express
https://hundred-cdn.s3.amazonaws.com/uploads/article/cover_image/1190/wide_Larry_Berger__center__visits_school_library_to_coach_kids_as_they_explore_digital_audio_recording.JPG
news

Join Larry Berger, Founder & Executive Director at Youth Express from the USA as he goes live on the HundrED Facebook Page to share why youth voice matters and how radio can act as an equalizer for participation, skills development, authentic expression, and distribution.

Where and when is the webinar?

Wednesday WEBdays are via Facebook Live and we invite everyone to actively participate in the conversation! You can access the Webinar by joining the HundrED Facebook page.

Who is Larry Berger?

Larry Berger is the founder and executive director of SLB Radio Productions, Inc. (Pittsburgh, PA, USA), the NPO behind Youth Express. Larry began working in radio as a teen in 1975 and launched a national-award-winning public radio program called The Saturday Light Brigade that still airs today. With degrees in engineering and in public policy from Carnegie Mellon, he leads a 10-person staff at SLB as they work to amplify voices of youth and members of other communities who often are under-represented in the media landscape. Under his direction, the SLB team has supported thousands of youth creating radio documentaries and personal commentaries. A radio-lover since early childhood, he still marvels at the power of the medium of radio -- and podcasting -- to enlighten, educate, and entertain listeners on a one-to-one basis. he's also a fan of jazz and folk music.

Jon Bindley oversees the Youth Express program and has worked one-on-one with hundreds of teens during his 5 years with SLB. He graduated from Duquesne University with a degree in English & corporate communications. One month later he moved to Nashville, Tennessee in pursuit of song-crafting and performance. In the fall of 2013, Jon began his teaching career as a K-12 substitute in the Metro Nashville Public School system. He returned to Pittsburgh in the summer of 2014 and joined SLB in the fall of that year as a staff educator. When he’s not engaging youth in the classroom or in the studio, Jon enjoys listening to records, reading, writing, and making new friends. 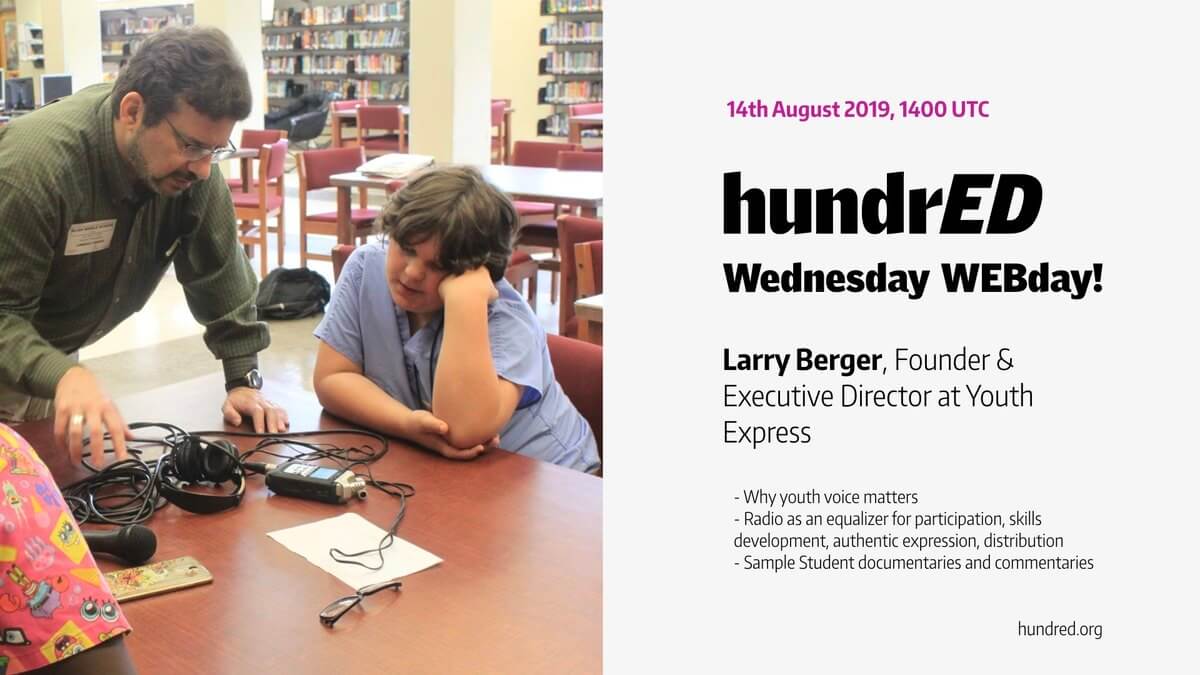 HundrED WEBdays take place weekly via Facebook Live and we invite everyone to actively participate in the conversation! You can access the webinars by joining the HundrED Facebook page. Contact our Head of Community, Pukhraj Ranjan, for more information: pukhraj@hundred.org.